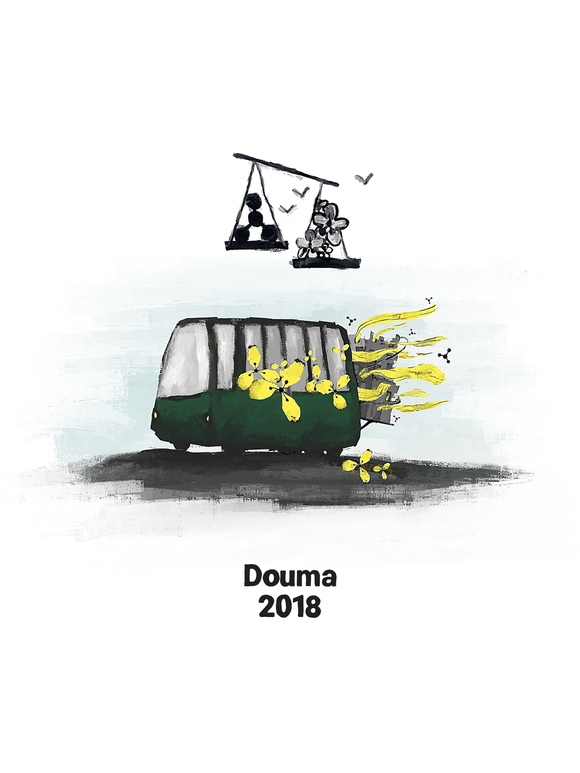 This chemical attack came at the end of a massive military campaign that the Syrian regime began on February 18, 2018, when the city was subjected to a large number of airstrikes and artillery and missile strikes, which caused more civilian victims.The military campaign, which was supported by the Russian forces, also targeted the cities and towns of Eastern Ghouta and led the regime forces to control all the cities and towns of Eastern Ghouta, except for the city of Douma, where it remained under the control of Jaysh al-Islam.

Douma is located in Eastern Ghouta in the Damascus Countryside Governorate, and it is the administrative center of the governorate.

It is located to the northeast of Damascus and is about 14 km from its center. It is the largest city in Eastern Ghouta, with a total area of ​​about 3000 hectares, and the population is 500 thousand people, according to 2010 statistics.

The participation of the people of Douma in the Syrian revolution began on March 25, 2011, and their first move to break the barrier of fear was as a mass demonstration in the municipality square in support of Daraa.

After the opposition military factions took control of the city in October 2012, the regime forces applied a strict siege on it and committed massacres against it that thousands of civilians were killed, and the city remained vulnerable to the bombing by the regime and Russian forces were constantly waging throughout the siege period.

- The United States condemned the chemical attack on Douma, and the former American president threatened to launch missile strikes against the Syrian government in response to the targeting of Douma with chemical weapons.

- The French Foreign Minister, Jean-Yves Le Drian, also condemned the Syrian regime's attacks on Douma in Eastern Ghouta, Damascus, on Saturday night, and Paris considered what happened near the capital, Damascus, as a violation of international humanitarian law, and French President Emmanuel Macron spoke via live television on the French Channel One.

He has evidence that the Syrian regime has used chemical weapons in the city of Douma.

- The Turkish Foreign Ministry also condemned the chemical attack on the city of Douma, accusing the Syrian regime of having a proven record of using chemical weapons.

- The European Union said that there are indications that the Syrian government forces have used chemical weapons against the besieged city of Douma, which is controlled by the opposition forces, calling for an international response.

On April 8, 2018, it was agreed between Russia and the regime forces on the one hand and Jaysh al-Islam on the other hand that the members of Jaysh al-Islam and those who want from the civilians would leave to regions of northern Syria, and it stipulated that the regime forces would enter the city as soon as the fighters and residents left.On March 1, 2019, the Organization for the Prohibition of Chemical Weapons published a report confirming the use of chlorine gas in an attack targeting the Syrian city of Douma in 2018.