Since using them for the first time in 2012,  the Syrian regime and its allies continue to deny having utilized chemical weapons, and they deploy various messages to this end. These denials can be divided into four categories that sometimes overlap. The following is a rebuttal of each of them based on statements issued by the regime and its Russian and Iranian allies.
Denial messages:
1-   Categorically deny the occurrence of chemical attacks.
2-   Accuse opposition forces of carrying out the attacks.
3-   Question information about the attacks.
4-   Question the entities that collect and analyze evidence and information.

These four types cover most of the statements made by the regime and its allies in this regard, and, accordingly, they are considered the main denial strategies used. The following is a respective review of some of the positions and statements that fall under these categories:
1- Categorically deny the occurrence of chemical attacks:
Since the outbreak of the Syrian revolution in 2011, the regime and its allies have frequently used this method after committing massacres. After the regime began carrying out chemical attacks against areas outside its control, the media narrative of the regime and its allies always began by denying that  the chemical massacres had ever occurred.
An example of this is the statements of the Syrian Minister of Information, Omran Al-Zoubi, regarding the chemical massacre committed by the regime on August 21, 2013, in Eastern Ghouta, in which 1,144 people were killed and 5,935 were injured. He said: “The pictures and information that were broadcast have all been fabricated and prepared beforehand .”
As for the Russian Foreign Ministry, it had the following to say about the massacre itself: "There is compelling evidence that pictures of the chemical attack victims were fabricated," without publishing any evidence for its claim. Also, Iranian Foreign Minister Javad Zarif "denied thata massacre had taken place" in his statement about the same massacre.
During the Security Council meeting held onApril 2021, the Syrian regime’s representative to the Security Council, Bassam Sabbagh, said: “Syria confirms, once again, that it did not use chemical weapons and that it worked credibly and transparently with the Organization for the Prohibition of Chemical Weapons and the United Nations to meet its obligations.”
In the second week of April 2018, pro-Assad media outlets, including Russian Channel 1, published pictures claiming that the chemical attack in Douma in 2018 had been an act. It later became apparent that these photos were taken from the filming of loyalist director Najdat Anzour’s  movie, "Man of the Revolution  .” Also, in the third week of that same month, Russian media published footage of what it described as scenes of a fabricated chemical attack on Douma in 2018. Again, it turned out that they were clips taken from a short film by the pro-opposition director Hammam Al-Hosari filmed in 2016.
2- Accuse opposition forces of carrying out the attacks:
While the Syrian regime and its allies in Russia and Iran always deny the occurrence of chemical weapon attacks, they are also quick to accuse opposition factions of being responsible for the attacks, especially after denying their occurrence becomes untenable due to the abundance of evidence.
Back to the Ghouta massacre of the summer of 2013, Iranian Foreign Minister Javad Zarif denied the massacre initially, but he also added: “If the incident happened, then the opposition certainly did it.” As for the Russian Deputy Foreign Minister, he said: "Moscow has received materials implicating opposition militants in the chemical attack from Damascus."
In statements by the Russian Foreign Ministry, it was claimed that "the missiles loaded with sarin, which caused the massacre, were launched from opposition-controlled sites.” Later, the Guardian newspaper published a French intelligence report that includes 47 satellite videos showing the moment when chemical missiles were launched towards Eastern Ghouta from areas controlled by the Syrian regime.
Contrary to statements by the Syrian Minister of Information, who categorically denied the massacre, the political and media advisor to the President of the Syrian regime, Buthaina Shaaban, said that "the victims of the chemical massacre in Eastern Ghouta are children. The opposition forces brought them from the villages of the Syrian coast to Eastern Ghouta, where they killed them with chemical weapons." In her statement, Shaaban ignored the siege imposed on Ghouta by Syrian regime forces, and the close to 400 kms separating Eastern Ghouta and the villages of the Syrian coast. These two facts, alone, are sufficient to prove the falsehood of its claims.
Afterwards, speaking about the 2017 sarin gas attack on Khan Sheikhoun, the representative of the Syrian regime to the United Nations, Bashar al-Jaafari, said: “The opposition forces were able to smuggle chemical weapons from neighboring countries, and they were the ones who used them in Khan Sheikhoun. Or the parties that dumped the Syrian stockpiles at sea left part of it and and used it in Syria  to pin the attack on the Syrian regime and allege that the formula used in the attacks is made of the Syrian precursor.
As for the Russian Defense Ministry, it said the following about the incident: "Syrian government forces bombed a chemical weapon depot in Khan Sheikhoun." Subsequently, the Joint Investigative Mechanism (JIM), which was established by a UN Security Council Resolution, proved that regime forces had been responsible for that attack. 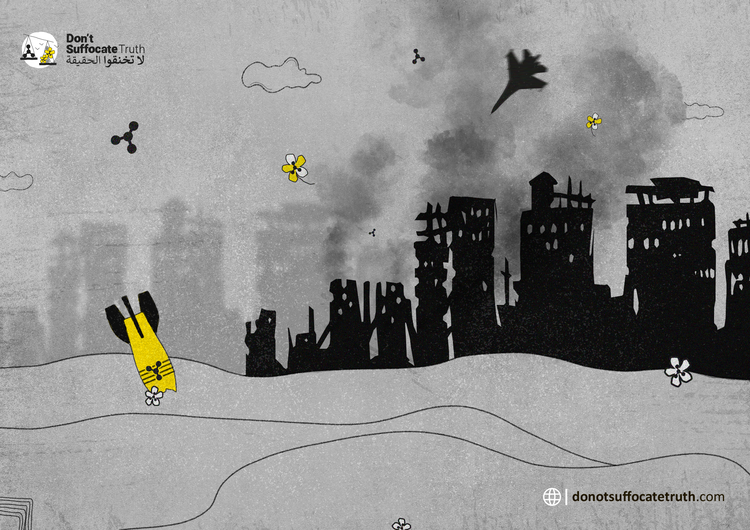